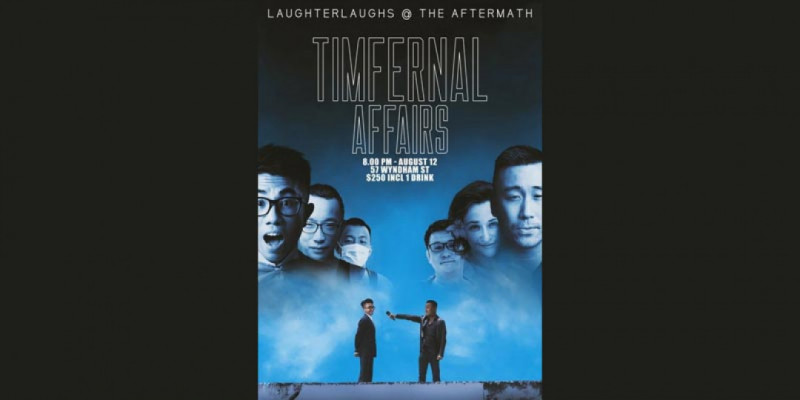 The best and brightest comedians in Hong Kong. Featuring Tim To (Winner: BushiRoast 4), Tim Chan (Melbourne Comedy Festival), Tim Lam (Headliner: Unpopped Comedy Night), Cassi Tomas (Chaotic Hong Kong Expats), Tamby Chan (Laugh Factory's Funniest Person in the World Contest), Jordan Leung (ESPN, NPR).“Tim To's jokes sound like someone recalling a night out whilst it's still happening and somehow funnier” - Ashley JamesTim To is a Chinese Canadian comedian, he grew up in Toronto and has spent about a decade living in Hong Kong. His comedic style explores his unhinged interpretation of his experiences and defines his own brand of logic. In 2020, he was the winner of BushiRoast 4 and continues to explore his comedic style in shows throughout Hong Kong. Tim Chan is the main performer in stand up comedy group “Hall of Laughs." Tim started his comedy career in 2011, he won 2011 Hong Kong International Comedy Competition and he did an opening act in Hall of laughs headliner Vivek Mahbubani’s one man show. In 2015, Tim did his first one man show and did an opening act in HK famous Radio DJ Cheuk Wan Chi’s one woman show.Tim is not only active in Hong Kong, he also performed in Mainland, Macau, Taiwan, Malaysia, Singapore & Australia.In 2017, Tim was invited by TEDxYOUTH to be a TEDx speaker.Tim Lam is American Chinese comedian who grew up in Singapore. Having originally worked in finance, he ended up in culinary school for a year, thus becoming the most disappointing Chinese firstborn son ever. These days, he enjoys telling dick and dead baby jokes for money and alcohol. He recently headlined a sold-out Unpopped Comedy Night at Bobby's Rabble.He also showers regularly and lives with a cat.Cassi FM chooses not to use her real last name because her family are already ashamed of her enough. Born and raised a Hong Kong "gwai mui", Cassi's number one interest in life is a bar in Lan Kwai Fong called Stormies. Other interests include ranting to people on a range of issues that that pretty much always fall on deaf ears such as: Hong Kong politics, feminism and the correct way to eat hairy crab. She can be seen around town performing stand up comedy or on one of her hit web shows, You Can't Sit With Us or Excuse My English and is usually being mobbed by a crowd of adoring fans.In her spare time, Cassi enjoys making memes about english teachers on the internet. Cassi is a Hong Kong local though you wouldn't be able to tell it looking at her face and ability to wield an umbrella without poking out someones eyes. Her comedy style has been reviewed in quotes such as "abrasive" and "i wasn't aware there was even a show going on" and "that girl seemed really sad".“He’s so easy. So natural. And what’s even better, he’s so topical. ” – Barry HiltonAfter immigrating to Canada at the age of 7, Tamby developed his sense of humor as a social defense mechanism in lieu of speaking fluent English. He has been continuously refining his comedic voice through trial and error ever since.Tamby represented Hong Kong in Laugh Factory’s Funniest Person in the World Contest, was the winner of the Bangkok division of the Magners International Comedy Competition 2018, placed second at the regional finals, has been selected as a finalist at numerous international comedy festivals, and has appeared on TV like four times.Jordan Leung is a stand-up comedian currently based in Hong Kong. He's previously lived in New York and San Francisco. you may have seen him on NPR, ESPN, or the Oracle (my high school’s newspaper). He was recently at the sacramento comedy festival.Most recently, Jordan founded No Pants Comedy, the first stand-up comedy show on Zoom.