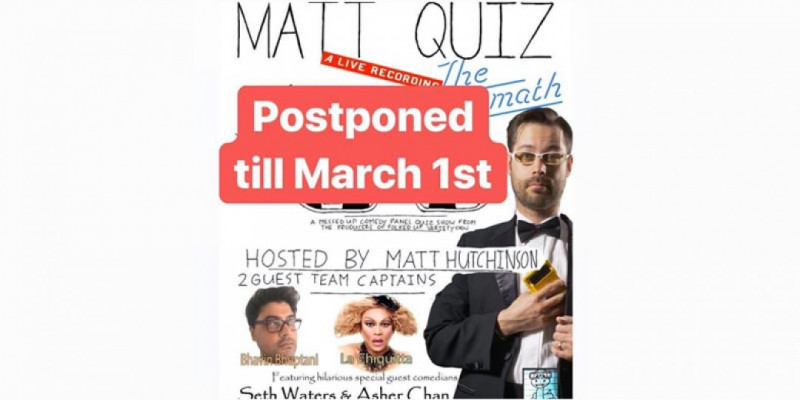 A Comedy panel quiz show where guest comedians and audience members compete for points to win prizes. Each round more testing than the last. With custom sound effects and jingles.Artists:MattHutchinson: described as the most technological advance comedian in Hong Kong. Some call his sens of humor ‘medium whimsy’ but he thinks that sounds like the name of a fart. Matt grew up in a seaside town in the south west of England in the 90’s. He writes organic free range jokes. Some may contain gluten and nuts. “…an intelligent and original new comic” Nick Milnes, co-founder Brits in Pieces. “an exiting up and coming comedian” Evelyn MokBhavin Bhuptani: Ruggedly good looking, guitar virtuoso and razor sharped satarist are all phased never used to describe Bhavin Bhuptani’s comedy. If you’re into one liners, whimsy and songs about Hong Kong living – then he’s your guy.La Chiquitta: Besides constantly entertaining the followers of Hong Kong nightlife, La Chiquitta has also graced other stages, including corporate shows, private parties, university lectures and out-of-town appearances. Also considered a regular fixture in the theatre circuit in Hong Kong, she has essayed several theatrical roles, the most notable of them, being Solange in Jean Genet’s The Maids, produced by RyeT Entertainment in cooperation with the American Community Theater.Hong Kong’s first recording drag artist she launched her single, Tranny In The House, produced by DJ Stonedog and released under Volume Up Records. It was later followed by Party Responsibly, which topped the iTunes dance charts for a week after it was released. Having gained media mileage and traction, she co-produced and presented a reality webseries, Drag It On: Drag Queens In The Making. She later organised Drag Overdose, the grand meet-up of professional, budding, and one-night-only drag queens of HK, for the city’s Pink Season in 2011. Every year since then, her little party has become one of the most anticipated events of the LGBTQ festival.In September of 2012, La Chiquitta started as a presenter of the weekly radio segment, Chiquitta Time, on RTHK3’s From Top to Bottom. This paved the way for her own radio show with the same station, The Gaybourhood, with co-host DJ Stonedog, which premiered in September of 2013 and ran for two seasons.She wrote a contribution to a coffee table book published in NYC, was featured in a magazine in SG, and appeared on TV for a special mini-docu in Manila.