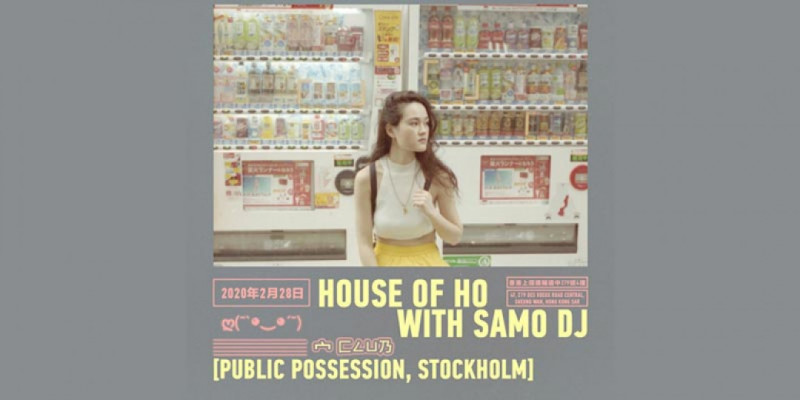 Local legend and 宀 resident Mr. Ho is back this month with the great dj and producer from Stockholm Samo DJ for a full night of House and rare grooves. Support: Mr. Ho (Klasse Wrecks, Hong Kong)Style: House---------------SAMO DJ Stockholm's Samo DJ continually sabotages the model with distinctive productions that fearlessly compact a myriad of demented ideas with a twisted Scandinavian cheek. One-half of Sling & Samo and co-founder of their label Born Free, Samo also creates faux-fantasy original soundtracks with MaxxxBass as KWC 92, while studio time with Tzu Sing, Baba Stiltz and Cos/Mes further transmutes his sound. Responsible for multiple standout L.I.E.S. releases as well as working with TTT and Public Possession.---------------MR. HO Mr. Ho has been collecting music and djing in clubs over the past 15 years with some remarked parties organised at Ohm in Berlin, and now for our great pleasure that he is back in Hong Kong. Mr. Ho entertains crowds with his energetic and eclectic sets that are rooted in House, Techno, Disco, Electronica and all their wonderful sub genres from all over the world. Mr. Ho is equally comfortable playing in small intimate venues, as to larger audiences during major festivals such as Sonar in Barcelona.In 2015, Mr. Ho ventured out from only releasing records on Klasse Recordings and, together with Lozano, brought out a well received EP on cult imprint Creme Organization. The record's enthusiastic reception from djs and tastemakers has led Mr. Ho to bring out more tunes on ESP Institute, Clone Jack for Daze series, Neubau, as well as on his own Klasse Recordings.Since 2018, Mr. Ho has been showcasing his skills at the boutique 宀 Club in Hong Kong, establishing a residency "House of Ho" every month.----------------