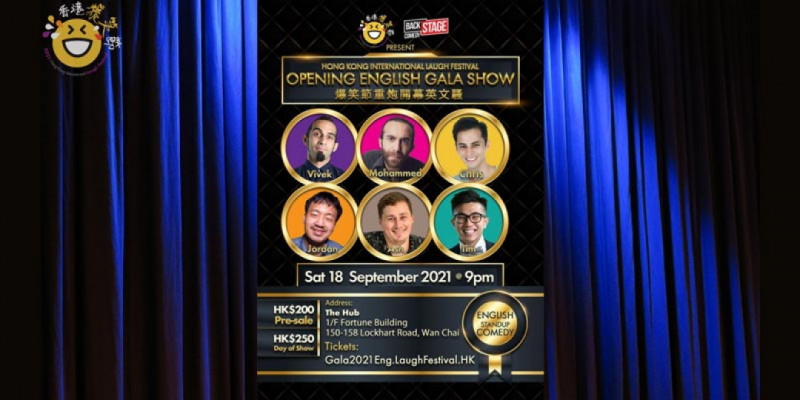 Experience the funniest samples of the best English acts in this year’s Hong Kong International Laugh Festival!Hosted by Hong Kong's favorite comedian Vivek Mahbubani, get set to enjoy the heavy weights of Hong Kong's comedy scene.Strap in with a stream of fast-paced chuckles from Backstage Comedy's co-founder Mohammed Magdi, hailing from Egypt, entertaining in Shanghai and somehow ending up running, performing and killing* at comedy shows in Hong Kong. Supplement that with some of the quirkiest observations about life by comedy veteran Chris Musni where he laughs about things like how old ladies on the train have no chance beating him to a seat. Jordan Leung may seem relaxed on stage, but his sense of humor is all-energy, making you giggle even when he's pausing to get ready for his next punchline. Blend that with Ash James' self-deprecating laughs about life as a white guy that only seems to get the leftovers of white privilege. Local HongKonger Tim Chan's English teacher might have given him an F in English but crowds have been grading him A at comedy because of his whiplash-inducing jokes about stupid things locals enjoy doing in Hong Kong.Come on down and get a taster of everything ahead in the Laugh Festival this year, calorie-free and dopamine-full#*Killing in the comedy world means making the audience laugh a lot.#dopamine is legal when it's created by your own body.Clarification added as required by this show's legal advisors.Check out more on www.thebackstagehk.com