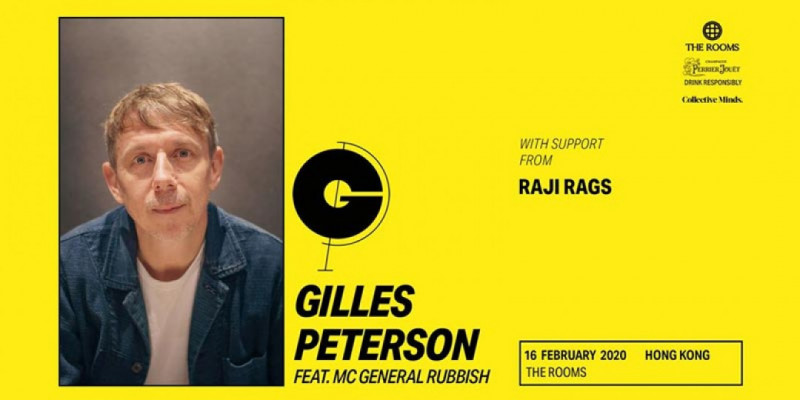 One of the most influential and renowned tastemakers in the world, the Brownswood head honcho Gilles Peterson returns to leave his sonic footprint on this side of the world once again. --- TICKETS (this is an 18+ show) ---Early Bird - HKD300Advance - HKD350Door - HKD400 TICKET LINK http://bit.ly/GILLESPETERSON2020HKTIX ---- GILLES PETERSON ----Gilles Peterson is a broadcaster, DJ and record collector who hosts a weekly Saturday afternoon show on BBC Radio 6 Music that’s one of the broadcaster’s most popular music shows, helms independent record label Brownswood Recordings, and is the founder of online radio station Worldwide FM. Throughout his career, Peterson has promoted the new frontiers of jazz, hip-hop, and electronic music. Starting by installing illicit transmitters and hosting shows for pirate radio station Radio Invicta, he later joined the newly-founded Jazz FM and, after that, joined the pirate-turned-legal station Kiss FM. In 1998, he was hired by BBC Radio 1, where he hosted a weekly show until his move to his current slot on BBC Radio 6 Music. He has been behind several game-changing record labels. Firstly, he founded Acid Jazz in the late eighties, and in the early nineties he started Talkin’ Loud where five of the albums on the label were nominated for a Mercury Music Prize. His currentventure is Brownswood Recordings and as a curator and collector, he’s compiled over 100 albums. In 2011, he founded the Steve Reid Foundation in memory of the legendary jazz drummer. The charity supports musicians who are ill and facing financial difficulties and, jointly with the PRS Foundation, runs the Steve Reid InNOVAtion Award, which has supported upcoming artists such as Moses Boyd, Nubya Garcia and Sarathy Korwar. Since 2005, he has hosted the annual Worldwide Awards in London and Worldwide Festival in Sète, France, and in 2019, he launched the new We Out Here festival in the UK.--- RAJI RAGS --- Born and raised in London city, Raj Chaudhuri (aka Raji Rags) is considered one of the key tastemakers in his hometown both behind the scenes and in front of the decks.Current A&R for R&S Records, previous A&R for Bleep, previous Head of Music for Boiler Room, and a since day-one DJ and host for both NTS Radio and Boiler Room right up to present day – with or without knowing it, you have probably seen Raj’s diverse curation and music tastes in action.Raj is also a co-founder of Livin’ Proof – the now iconic hip-hop party and DJ collective that have hosted the UK debuts of A$AP Rocky, Danny Brown, and early career performances from the likes of Action Bronson, Schoolboy Q, Joey Badass, A$AP Ferg, Hudson Mohawke and countless others.Refusing to be restricted to a genre or style – Raj has established himself as one of the most pivotal figures in the London music landscape and one of it’s most trusted DJs in skills and selection. --- Listen & Follow --- Website: http://www.gillespetersonworldwide.com/ Spotify: https://open.spotify.com/user/gillespetersonofficial Instagram: https://www.instagram.com/gillespeterson/ Facebook: https://www.facebook.com/gillespeterson/ Soundcloud: https://soundcloud.com/gillespeterson The Organiser/Venue Owner reserves the right without refund or compensation to refuse admission/evict any person(s) whose conduct is disorderly or inappropriate or who poses a threat to security, or to the enjoyment of the Event by others.Ticket holders assume all risk of injury and all responsibility for property loss, destruction or theft and release the promoters, performers, sponsors, ticket outlets, venues and their employees from any liability thereafter. The resale of ticket(s) at the same or any price in excess of the initial purchase price is prohibited. There is no refund, exchange, upgrade or cancellation once ticket(s) are sold. *THIS IS AN 18+ SHOW* No Photography or Videography allowed